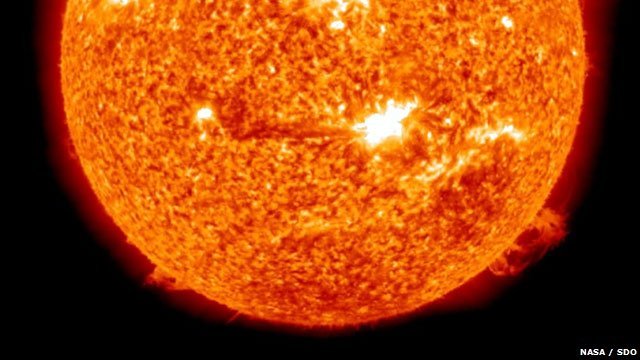 Scientists around the world will be watching closely as three eruptions from the Sun reach the Earth over Thursday and Friday.

These "coronal mass ejections" will slam into the Earth's magnetic shield.

The waves of charged solar particles are the result of three solar flares directed at Earth in recent days, including the most powerful since 2006.

The biggest flares can disrupt technology, including power grids, communications systems and satellites.

The northern lights (Aurora Borealis) may also be visible further south than is normally the case - including from northern parts of the UK.

"Our current view is that the effect of the solar flare is likely to reach Earth later today (Thursday GMT), possibly tomorrow morning," said Alan Thomson, head of geomagnetism at the British Geological Survey (BGS).

He told BBC News: "In the scientific community, there's a feeling that it's not as intense as we first thought it might be. But it's possible still that it could be a large enough event for us to see the northern lights in the UK."

However, weather forecasts suggested cloudy conditions could mar views of any aurorae.

The US National Oceanographic and Atmospheric Administration (Noaa) said that three coronal mass ejections (CMEs) were en route as the result of solar flares on the 13, 14 and 15 February (GMT).

"The last of the three seems to be the fastest and may catch both of the forerunners about mid-to-late day tomorrow, February 17," read a statement from Noaa's Space Weather Prediction Center. The northern lights could be seen further south than is normal

The flare recorded at 0156 GMT on 15 February was the strongest such event in four years, according to the US space agency (Nasa), which has been monitoring activity on the Sun. The event was classified as a so-called X-flare, the most intense type.

The source of all three events, sunspot 1158, has expanded rapidly in recent days.

Solar flares are caused by the sudden release of magnetic energy stored in the Sun's atmosphere.

Their effects can interfere with modern technology on Earth, such as electrical power grids, communications systems and satellites - including satellite navigation (or sat-nav) signals.

Although scientists are expecting most geomagnetic activity to occur on Thursday, Chinese state media has already reported some disruption to shortwave radio communications in the south of the country.

In 1972, a geomagnetic storm provoked by a solar flare knocked out long-distance telephone communication across the US state of Illinois. And in 1989, another storm plunged six million people into darkness across the Canadian province of Quebec.

Dr Thomson said it was possible infrastructure could be affected this time, but stressed: "The X-flare that was observed the other day was lower in magnitude than similar flares that have been associated with technological damage such as the loss of the Quebec power grid... and even the large magnetic storm in 2003, which caused some damage to satellites in orbit."

Scientists will have around half an hour's notice that the wave of charged particles is about to hit the Earth's magnetic shield.

This is taken from the point at which a Nasa satellite called Ace (the Advanced Composition Explorer) registers the solar radiation on its instruments: "We're sitting waiting for that event to happen," said Dr Thomson.

Researchers say the Sun has been awakening after a period of several years of low activity.

More on This Story

Posted by NOTES FROM THE WILDSIDE at 3:04 PM