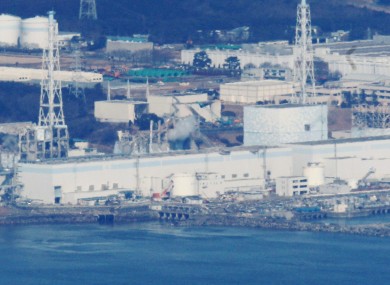 An aerial photograph of the Fukushima I plant, taken while engineers attempted to drop water on it from helicopters.
Image: AP

ENGINEERS AT THE Fukushima I nuclear power plant in northern Japan have extended a new emergency power cable to the front of the complex – hoping to create a medium-term solution to the plant’s ongoing cooling problems.

Each core reactor has faced the possibility of overheating as a result – with some of the active nuclear cores already having gone into partial meltdown.

Overnight, however, engineers finished laying a new industrial electricity supply to the plant – a move which could allow the primary cooling systems to be restored, allying any major fears of further meltdowns.

Operations to restore power through the new facilities were underway at the time of publication, government spokesman Yukio Edano confirmed.

If the operation proves unsuccessful – or even if it is – a spokesman for plant operator Tokyo Electric Power Company (TEPCO) has acknowledged that it could pursue the so-called “Chernobyl solution” to stop any further radioactive emissions from the facility.

That solution would involve effectively burying the plant with sand and concrete to seal it off from the outside world – a tactic which, as the name suggests, was used at the Chernobyl power plant in the Ukraine after its explosion in 1986.

The UN’s nuclear watchdog, the International Atomic Energy Agency, said that the main concern in the meantime was at the ponds of ‘spent’ nuclear fuel at reactors 4, 5 and 6, explaining that the water temperature in such storage pools is usually around 25°C or lower.

When the temperature in the pools at reactors 5 and 6 were monitored yesterday, by comparison, both recorded Celsius temperatures of above 62°C.

“If fuel is no longer covered by water or temperatures reach a boiling point, fuel can become exposed and create a risk of radioactive release,” an IAEA statement explained.

“The concern about the spent fuel pools at Fukushima Daiichi [number 1 plant] is that sources of power to cool the pools have been compromised.”

It was those fears that had seen Japanese authorities yesterday fly helicopters over the plant in attempts to douse the reactors with seawater.

The official level of concern about reactors 1, 2 and 3 – as measured on the International Nuclear Event Scale – has now been raised from level 4 to level 5, the equivalent of the partial meltdown at Three Mile Island in the 1970.

A spokesman for General Electric also confirmed that staff from the company were joining TEPCO, in attempts to avoid a full-scale meltdown.

GE designs nuclear reactors, and was involved in the architecture of all six of the reactors at Fukushima I, Reuters reports.

Japan this morning observed a moment’s silence to mark the exact time one week ago when the major earthquake struck, which triggered a series of massive aftershocks in the region. The US Geological Survey has recorded 547 individual aftershocks to that quake.

Gavan Reilly gavreilly
Posted by NOTES FROM THE WILDSIDE at 9:02 AM